Archive for You Should Know

Please take a minute to read this article if you’re part of the community or know anyone who could benefit from such great news. Thank you.

It hurts communities, it hurts counties and it hurts states if their citizens cannot be productively employed or aren’t part of the tax base.

September 10, 2018 exec. director You Should Know No comments

Guys if you’re available and think you might be ready to start a small business, this is the place to be. GMENConference

Small Is BIG! is our theme for the 2018 GMEN Conference celebrating the power of entrepreneurship and business development to transform communities, create and restore generational wealth and knock down barriers to human achievement. Small is BIG! acknowledges not only the importance of small business to job creation and growth, but how small businesses have disrupted and changed the world through gig economies and various platforms.

Small Is BIG! remembers that the legacy of Atlanta, 50 years after the death of Dr. Martin Luther King Jr., has come full circle and looks to ways this city can become the focal point in the United States for economic re-engagement for African-Americans across the southeast..

During the conference we will focus on celebrating our past, evaluating our present and innovations needed for our future growth of micro-enterprises and small businesses.

Here are some new links you can review to find suitable employments for you and others you know are job hunting in the Atlanta area. Job search opportunities are increasing for ex-offender population as a whole as new laws are been passed across the country. If it is possible, please read the article in the 2nd link below to get more understanding of new avenues to help the population. Good luck in your search. 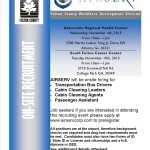 After reviewing the flyer below, please let us know if you’ll need help in following and though with the employer. Thank You

Interested about finding out more information about your previous criminal history? Here is an opportunity for learn how to do just that. Starting on October 2nd, 2015; the Georgia Justice Project is holding a one-hour information session for individuals who have questions about how to read their criminal history, what they can get restricted (expunged), and how to get a pardon.

If you or someone you know is interested in finding out more, please email me directly for more at: REENTRY

Best of luck in taking a giant leap towards a clean record. 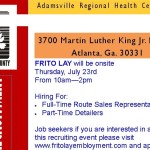 The result of the gathering at the State Capitol. Information about how prison has become “big business.” Be careful! Thanks Matthew!

Our story with the most shares this week focused on the rise of private, for-profit prisons. Yes, there is such a thing; in fact, it’s a $70 billion industry and many of the major contractors who oversee these prisons are also publicly traded corporations.

States hire these companies because they’re cash strapped, and the cost of incarcerating people is not cheap — between $24,000-$30,000 annually. Private prison companies claim they can house, feed, and monitor inmates more cost effectively than state governments and so there you have it– they win big contracts.

Why is this messed up?

Most private prison contractors have occupancy guarantees that mandate their prisons remain between 80 and 90 percent full. In other words, the more prisoners they house, the more money they make. And the more prisons that are built, the more contracts they win.

The business model of private prisons is to maximize the amount of people in America who are locked up– not to rehabilitate or ultimately lower incarceration rates. That’s why these companies fight hard for “tough on crime” policies. In the past 10 years, the Corrections Corporation of America (the largest private prison company) spent 17.4 million on lobbying government to criminalize more activities and increase sentencing periods.

This is one reason why America has more prisoners per capita than any other nation in the world and why nearly 1 in 3 young people will be arrested by age 23.

So what can we do?

For starters, do not invest in or buy shares of publicly traded private prison corporations. Second, vote for politicians who want to reduce the incarceration rate and end the War on Drugs. If you are not registered to vote, you can do so here.

Are you a service agency that needs some furnishings for your program? Do you service men and occasionally have a need for donated clothing for men in your program? If so, please send email with your contact number to info@reentryproject.org so we can add you to our database. Items offered to Reentry that we cannot accept due to lack of space may be re-routed to your programs to help for free.

Thank You for your service to those in need of helping hands.

Gov. Nathan Deal signs Senate Bill 365 on Sunday during a special morning service at Antioch Baptist Church in Gainesville. The bill aims to help nonviolent offenders get back to work.

One in three Georgia inmates will return to prison within three years of being placed on parole, but a new state law aims to reduce those numbers and help nonviolent offenders get back to work.

“It is that third leg of the criminal justice reform program that we’ve put in place,” Gov. Nathan Deal said. “The first were the adult accountability courts. Second was the juvenile diversion centers, and this third will be the transition, support and re-entry (program) for those who are in our system who will be getting out.”

Deal signed Senate Bill 365 into law Sunday at Antioch Baptist Church in Gainesville. The changes, part of the governor’s three-pronged approach to criminal justice reform, focuses on helping inmates make the transition from incarceration back into society.

“That is dealing with our population in our prison systems,” Deal said. “Those almost 60,000 individuals. At some point in time, almost all of them will be paroled and will be back in our society. If we do not do what we can to make it possible for them to re-enter and be law-abiding citizens when they re-enter, then we have, in fact, increased the danger to all of us as Georgians.”

According to Deal, one in three inmates on parole end up going back into prison within three years of their release.

“This speaks to a number of issues that Georgia has lagged behind,” said Sen. Butch Miller, R-Gainesville. Miller was a co-sponsor of Senate Bill 365. “I think the governor has shown great leadership in having this criminal justice reform (be a part of) his administration.”

“Almost 70 percent of the inmates in our state prison system do not have a high school diploma or a GED,” Deal said. “Now, you know how difficult it is for someone who does not have that kind of basic educational skill to get a job. Tack on top of that, a felony record that you bring with you.”

To help increase education levels among inmates, Deal has hired outgoing Forsyth County Superintendent Buster Evans to join the Department of Corrections in July as the assistant commissioner of education.

“We’re going to turn many of these individuals around,” Deal said. “We’re going to give them the chance to do what they did not take advantage of … when they were younger. And that was to get a high school diploma.”

Deal also said the state will set an example for private sector employers by not automatically dismissing job applicants with a criminal history.

“We decided Georgia can set the right example,” Deal said. “With the exception of certain jobs that would require a little higher scrutiny of background, all of the other jobs — which is a vast majority of jobs in state government —somebody will not be automatically rejected because they had to check that box.

“If somebody has taken advantage of the opportunity to change their life and to change who they are, they deserve the chance to tell somebody that’s considering them for a job what those changes have been.”

A certification program will be created to help adult inmates better transition out of prison and back into their community. After course completion and their release, they’ll be able to show that certificate to potential employers.

“I support the governor in his efforts to provide additional opportunities for offenders to transition successfully back into society,” Warden Walt Davis of the Hall County Correctional Institute said. “That’s really the gist of it. He’s setting up things, he’s putting things into motion, he’s looking at some changes … to help eliminate some of those things, and to allow a more successful transition. I commend him for that.”

The law encompasses other areas well, including giving judges more discretion when suspending the driver’s license of someone with a minor drug offense.

It also revises some aspects of foster care, including making sure a child’s long-term housing plan is periodically reviewed to ensure it’s still the best plan for that child.

Deal hopes the changes, once implemented, will decrease how many offenders return to prison, instead remaining at home and able to contribute to their families and communities.

“How fast will we see the changes? I can’t tell you that,” the governor said. “Sometimes, you have to plant the seedling and wait a few years to be able to sit under the shade of it.

“But if you never plant the seedling, you’ll never have the tree to sit under. So today, we’re planting the seedling.”

The Associated Press contributed to this report